We often preach that one should ride more, work less. Days are best spent in the saddle, rather than behind a desk or screen. That life is not about getting and results, but instead, about moments and experiences. Sadly, it seems with age, many of us stop living and simply start existing, falling victim to routine, rarely taking that left turn simply for the sake of seeing where it goes. It’s from this naive curiosity and spirit of doing for the sake of doing, that Summer Skip Day was born – a day for ditching work and goofing off in the mountains with a few like minded folks.

The mountains have four distinct seasons and with each brings a welcome change from the prior. However, of all the seasons, summer holds a particular appeal. Growing up in the midwest, summers were filled with warm evening breezes, fireflies, and and moon lit dips in the lake – cruising up and down country roads smoking cigarettes and listening to Tom Petty wondering if you could make it last all night. As such, it seemed obvious that the first Summer Skip Day be held on the solstice.

The plan was simple – Meet at Atticus for coffee and breakfast before setting out to ride bikes for as long as our legs would permit. The route would take us up to Shadow Lake, where we’d find a box full of ice cold beers, snacks, and inflatable rafts. Post lake party, we’d climb Puke Hill to the Wasatch Crest, before descending down to Canyons Village and back into town for some much needed calorie replenishment therapy. Above: The day started at Atticus Coffee & Tea House who deserve a huge thanks for helping sponsor Summer Skip Day. Stop in and say hey to local owners Randy & Ericah, as they’re rad folk and fellow riders. Above: Due to the heat, these are the only two ride shots of the day. From Atticus, we rode up Daly Ave to Ontario Bypass, across Empire Link, up Tommy’s 2-Step to 3 Candles to Keystone before stopping at Shadow Lake for a swim & beer sesh. Above: Legend has it, there’s a box filled with ice cold beer somewhere along the trail. If you find it, keep the karma flowing and don’t blow up the spot. Above: Perhaps the highlight of the day was the Shadow Lake swim party. Considering it was the hottest day of the year with not a cloud in sight, the forecast was just right for stripping off and jumping in. Above: What to do when you reach the top of Puke Hill on the hottest day of the year… ice cold extendos of course! Given that it was 80+ degrees at 10,000 feet, it was touch and go for a bit after this one 😉 Above: From Atticus to the base of the Canyons via the Crest was right at 25 miles and 4,000 ft of elevation gain. Above: Not only was it the longest day of the year, but a full moon. The first time in 50 years that the full moon and solstice have coincided.

Again, much appreciation for Atticus as well as all who came out to help make the first Summer Skip Day a success! As long as people keep showing up, we’ll continue to do our part in making things happen. We’re already planning the next skip day, so stay tuned for details! 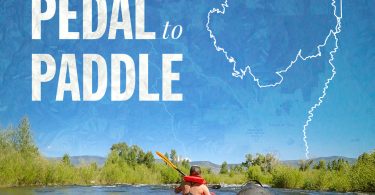